An art walk targeted for May will highlight outdoor murals in the community and promote it as a cultural destination.

A short film documentary will feature business owners and others touting the strengths and pride of those who live and work in Homewood.

Those are some of the components in the works as part of a new imaging campaign, The Homewood Experience, which aims to position the neighborhood as a place for fresh investment and revitalization. 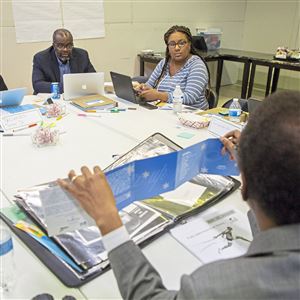 Joyce Gannon Bringing business back to a blighted neighborhood

The campaign is a project of the Homewood Community Development Collaborative — an organization comprised of nine community groups — and Neighborhood Allies, a Pittsburgh nonprofit that consults and invests in distressed communities.

Of that total, $100,000 is earmarked for the Homewood Experience campaign.

Other initiatives being funded with the balance of the grant include new lighting and building facades, redevelopment of vacant properties, and support for entrepreneurs.

Demi Kolke, Neighborhood Allies’ senior program manager for corridor revitalization, acknowledged Homewood’s reputation has been tarnished in recent decades by “some social ills that plague the neighborhood” including poverty, gun violence and drugs.

Once a prosperous middle-class community that was filled with immigrants, linked to Downtown by street cars and supporting a thriving retail district, Homewood took a hit in the 1950s and 1960s when many affluent black and white residents left for the suburbs.

Of the neighborhood’s approximately 6,500 residents, 93% are black and 40% live below the federal poverty level, which was $24,250 for a family of four in 2015, according to data from the University of Pittsburgh’s Center for Social and Urban Research and the American Community Survey. 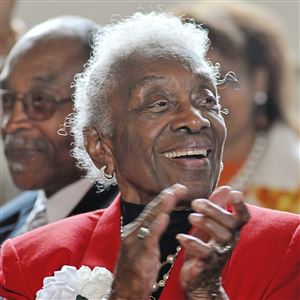 Addressing a roomful of community residents, business owners and other stakeholders Tuesday at the Carnegie Library of Pittsburgh’s Homewood branch, Ms. Kolke said the branding initiative aims to leverage historical and cultural strengths so that “other parts of the city can see … how proud we are of Homewood … and to spur the rebirth of this neighborhood.”

To develop and execute the campaign, Neighborhood Allies and the Homewood Collaborative retained Soleil Meade, who operates Soleil Branding Essentials, a McKeesport brand development firm; and Sadik Roberts, who runs Pyramid PGH, a marketing agency based in Knoxville.

Before they craft a logo, website, social media and other collateral, Ms. Meade and Mr. Roberts plan to reach out in person and electronically to Homewood stakeholders to generate their input about the neighborhood’s strengths and a vision for its future.

Taking the pulse of residents and others who own businesses, work in or go to church in the community is critical as more outside investment is made in urban pockets adjacent to Homewood, said Ms. Meade.

“The gentrification happening in East Liberty looks like it’s marching its way here,” she said.

Before that occurs, conversations about the neighborhood’s direction need to happen with residents and others “because their voice matters,” said Ms. Meade.

A survey she and Mr. Roberts created asks respondents what they would change in the neighborhood; what developments they envision in the next five to 10 years; and which local organizations, individuals and cultural pieces best represent the community and could be featured in materials like street banners.

The survey will be available online and a paper version will be distributed through a door-knocking effort.

Those without computer access can return the survey to Everyday Cafe, a coffee house on North Homewood Avenue.

After campaign promotions are developed and executed over the next four to five months, Mr. Roberts said he and Ms. Meade will conduct evaluations and reflection sessions to determine how to extend the initiative and generate funding for future phases.

“Our primary goal is to channel the voice of residents,” said Ms. Meade. “We want the resounding voice of the community.”

Walter Lewis, co-chair of the Homewood Collaborative and president and chief executive of the nonprofit Homewood Children’s Village, sees the re-branding campaign as a way for the community to “take its message Downtown” that Homewood has a strong history and is ripe for future investment.

“Homewood at one point in time was one of Pittsburgh’s most livable communities,” said Mr. Lewis. “That’s not the case today.”

This site uses Akismet to reduce spam. Learn how your comment data is processed.